Navigation
Back to Posts
21 September 2014

Which software to develop apps and ebooks for children?

I tested two year long a not-listed-here software.
I liked it a lot: it was very promising, easy to use, and with a lovely design. Unfortunately, between 2013 and 2014, it was gradually dismissed leaving clients with no answers.

I was left with two animated books working only in preview mode.

When I accepted the idea that the quickest solution was to restart everything from 0, I took a great look at other digital publishing tools. In this post you can find my first impressions about them as a simple not-techie user, and in the comments you can read how my perspective have been gradually evolving during these years through more experience in kids apps.

The best software for every-age-target video games is definitely Unity.
Nosy Crow, Toca Boca, and even Rovio and Ubisoft have been using it.

It is affordable as “companies or incorporated entities that had a turnover not exceding US 100,000 in their last fiscal year” can get a free fully working license, and it is super versatile.

For me, it was love at first look: with Unity I would be able to realise almost everything; it would be been only up to me, my creativity and my fluency in C#! The only downside was that I was not pretty fluent in C#… Actually I did not know C# at all.

Fortunately, even if you can’t program, there are at last four-five tools to develop beautiful apps without coding, especially when meaning animated stories for tablets, smart phones and e-readers.

The main functionalities you can get without coding, simply using drop down menus are:

Honestly, using only these functionalities, the result will be hardly as realistic as the Nosy Crow apps, but surely enough to reach, and maybe overcome, the technical level of many average apps like Peppa Pig of Penguin, and Little Critter or Doctor Seuss of Oceanhouse Media… Ultimately even some very well reviewed apps use only 5-6 simple interaction patterns!

All of the five software I’m speaking about have these features, are in a early (risky) developing phase, and have different but comparable prices range for indie authors developing just one or two apps per year.

The main difference consist in the kind of products/markets they are specialized in.
So, above all, you should ask yourself what do you want as your principal output.

Do you want mostly produce e-books to distribute in iBook Store and other e-books stores, and apps for Android and iOS?

Pubcoder  For Mac and Windows

Pubcoder could be the best solution for you.
Listed by Apple as suggested tool for epub3, it is basically focused on helping also not very skilled people produce interactive ebooks in an easy, fast way. You can either import an InDesign project or start a new one from 0 uploading pictures and sounds trough the Power Point-like interface.

Personally, in the second way, I was able to produce a page in one single day without reading any manual, and to export it as epub by myself, without any external intervention by the company; so it seems it makes, very smoothly, what it promises.

The main downside is that the trial time (one month) may be quite short, considering that still many people have never tried to develop a digital book before.

Do you prefer to develop stories to sell as apps in Apple App Store and Google Play?

Kids Interactive Book Maker looks like to be the best solution to make book apps.
Initially they were focused only on publishers and big clients, then gradually opened to indies, and now they have also an interesting front store where selected authors can publish their own apps reaching a bit more visibility than selling by themselves directly through the App Store.

It is free to use and prototype, you pay only when you want to have your files exported, and the basic functionalities are simple enough to find and use. When it comes to mix main and extra functionalities, it may become suddenly tricky, but the quite unintuitive workflow is compensated from many interesting goodies like augmented reality and lots of prepackaged edu games.

The main downside is that it allows only the landscape format, so if you are planning a portrait app, you have either to change program or to change your project.

If you are betting everything only on Apple and App Store you could also try Demibooks Composer:

Demibooks Composer  For iOS only.

They have an interesting partnership and an indie front store with Usborne Books and More, the distributor of one of my favorite publishing houses.

Composer is very convenient for school teachers because it is easy to use, well documented and runs directly on iPad, so you don’t need to have an expensive updated Mac to develop your own stories.

On the other hand, if you are a professional designer, or a publisher with many books to produce, you probably will get quickly bored with working on a few-inch device having to switch to your computer and reimport images each time you need to modify them.

They are part of the huge Bertelsmann Group (with Random House, Gruner+Jahr Mondadori and many others great publishers) and claim to be producing a software with almost the same functionalities of other programs listed above.

For now, I could only take a look at their private beta during a Skype conference this July and it had a Flash-inspired very promising look. The website is already full of interesting tutorials and the open beta is planned for October 2014. Let’s see…

UPDATE: Tiger Create is out from beta now! I have not tried it yet, have you?

So what am I using for my apps? 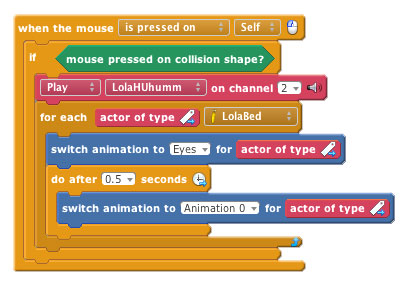 At the moment I’m using Stencyl, which is properly aimed at video games production for desktop and mobile but, unlike Unity, it (theoretically) doesn’t require any programming skills.

It is strongly inspired to the popular blocks interface of MIT Scratch, which allows primary school children to make video games.

In fact, I’m writing interactions putting together blocks, which -like puzzle blocks- check at my place if I am respecting code “grammar and syntax” and if my code makes sense.
Could I program, I would also be able either to type directly using the open source Haxe language or to construct my own blocks.

I am not convinced it is the best solution for proper book apps: you have eventually to use your own logic (feeling sometimes like a running-on-mountain-old Diesel) and it’s not projected to manage long texts and word by word narration easily, but, in spite of this, I find it a very good solution in my case, as I have mostly a toddler/kindergarten target, because it allows me to produce many different kinds of apps, not only book apps.

I have chosen it primarily for this flexibility and for its good compromise of price, difficulty to use, and possibility to learn.

UPDATE:
My app Lola Slug at the Exhibition was eventually published. You can download it here: